Located approximately 20 miles north of New York City on over 40 acres of land, the Russian Orthodox Convent Novo-Diveevo was founded in October of 1949 by Father Adrian Rimarenko (later Archbishop Andrei of Rockland). Over the years the convent has been home to many nuns from various parts of the world. Former Abbess Irina came from China in 1962. The current Abbess, Abbess Makaria, is the sixth abbess of the convent. She came to the convent in 1997 and was elevated to abbess in 2016.

The convent is home to many sacred relics including a full length portrait of St. Seraphim of Sarov painted during his lifetime, a cross from the Ipatiev House, and a “Vladimir” icon of the Holy Theotokos, a gift from the Optina Pustyn monastery.

The convent grounds are comprised of two churches: the Cathedral of St. Seraphim of Sarov and a “small church” in honor of the Dormition which is located in the convent house. Also on the grounds are an adult home for the elderly, a guest house for visitors, and the largest Russian Orthodox cemetery in America. Next to the Cathedral is a newly renovated dining hall used for gatherings and meals after Sunday liturgy. The convent is also home to a newly renovated ‘Book Nook’ with an extensive collection of Orthodox books and icons. 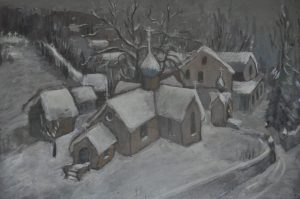